A Family Vacation & Fishing Out the Back Door.

Grand Cayman is special for a simple reason: all the amenities your family wants, and fishing out the back door. Now, Cayman can’t compete with hardcore fishing locations; we’re just too small and don’t have the sheer real estate of the Bahamas or Florida Keys. But, what if the family wants to come with? What will the kids do for a week at a rustic fishing lodge… with no WiFi? And your wife?

Well, Grand Cayman has Seven Mile Beach… and Stingray City, and jetskis, and the best dining in the Caribbean, and shopping, and kite-surfing, and the Turtle Farm, and Dolphin Cove, and lots more (including WiFi).

And, the Cayman also has a variety of inshore, light-tackle species. At FISH BONES we specialize in fly fishing, and our anglers can be on tailing bonefish 15-minutes from their hotel, but the same species are available for those who prefer conventional tackle. These include: Bonefish, Tarpon, Permit, Snook, Jacks, Triggerfish, Snapper, Barracuda and Pompano.

You have the possibility of a Grand Slam—Bonefish, Tarpon and Permit—on all three islands.

Of course, there are also reef, bottom-fishing and offshore options. Cayman is host to a wide variety of blue-water migrants, including Blue Marlin, Mahi Mahi, Yellowfin Tuna, and Wahoo. (There have also been rumours of Swordfish and Sailfish, but fishermen always tell stories.) Some of these fish can be taken on light-tackle, but the majority of deep-sea fishing in Cayman is trolling from sportfisher boats. If that’s your interest there are plenty of qualified captains. Of course, many deep-sea anglers also enjoy light tackle fishing inshore, especially for hard-fighting species like bonefish and tarpon.

Even though you have the possibility of a Grand Slam—Bonefish, Tarpon and Permit—on all three islands, they are not equal when it comes to fishing. Grand Cayman, for example, is much, much larger than Cayman Brac or Little Cayman, and the sheer marine real estate means the variety of available species is greater. Snook are often found on Grand Cayman’s shorelines, but I’ve never seen (or heard) of any snook on the other two islands. This might be because snook prefer a mangrove habitat, and the smaller islands don’t have much mangrove swampland. Grand Cayman has the Central Mangrove Wetlands: a vast uninhabited, uncharted ecosystem that is home to countless juvenile fish, lobster, birds, and even the extremely rare Cayman saltwater croc.

You never know what you’ll catch
casting a fly in Cayman!

Also, it seems Grand Cayman—the largest island—produces the largest bonefish. Average bonefish in Little Cayman are roughly 2 pounds. Bones on Grand Cayman average 3-5 pounds, and we daily see 7-9 pound bonefish, real trophies anywhere. Grand Cayman also has more square miles of flats, with over 30 miles of wadeable shoreline flats. (And that’s not including 7-Mile Beach, which is also fishable and does hold bonefish, pompano and lots of jacks… just watch your backcast!) With a rental car and an adventurous spirit, there’s no telling what you find around the next headland. 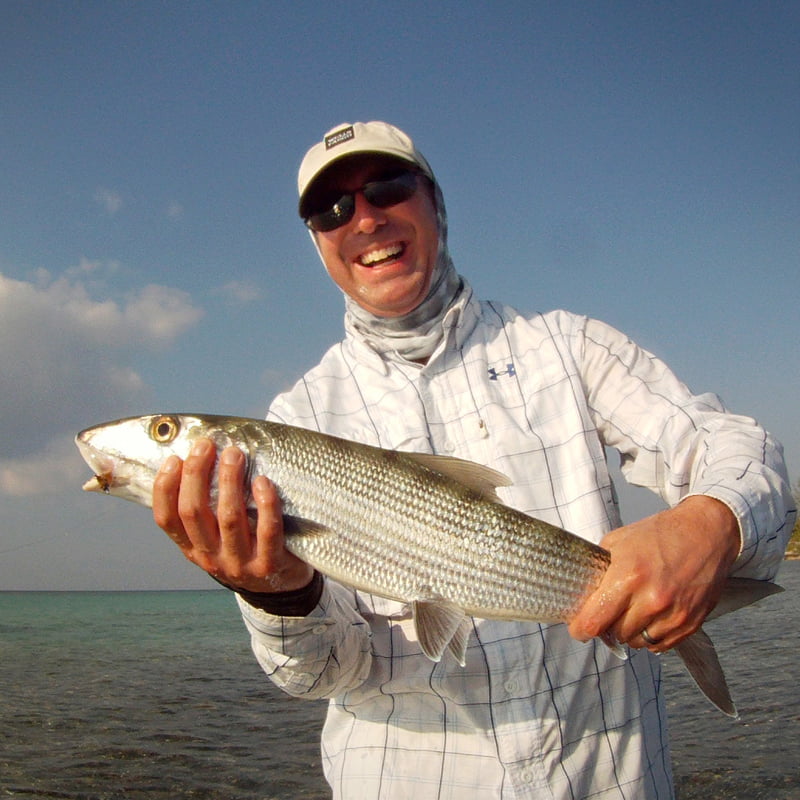 Grand Cayman Bonefish on the Fly.

BONEFISH…
are one of the most predictable species for Cayman shore fishing, found daily on the same flats on the same tides. They don’t actually live on the flats but in the deeper water inside the reef. This is the best place to target them on spinning gear, and there are captains who specialize in fishing the “muds”—large areas of milky water where hundreds of bonefish (and snappers and jacks) have stirred up the bottom while feeding. In this deeper water bonefish aren’t nearly as spooky. A heavy bucktail jig tipped with shrimp works well in the muds, and can often yield Mutton Snapper and Jacks as well.

Tailing bonefish on fly is truly the champagne of the sport.

As the tide floods the shallows, bonefish move in to feed. You can spot their flashing tails as they dig crabs and shrimp out of the bottom. The rising tide is a prime time, and a fly rod is the perfect tool for making delicate presentations in shallow water. Unlike heavy lures or bait, which loudly splash, flies weigh almost nothing. They can be dropped very close to the fish, increasing the chances that the fish won’t spook. This is all sight-fishing, and very exciting. In fact, it is one of the few things you can do that lives up to the hype! Taking tailing bonefish on fly is truly the champagne of the sport. 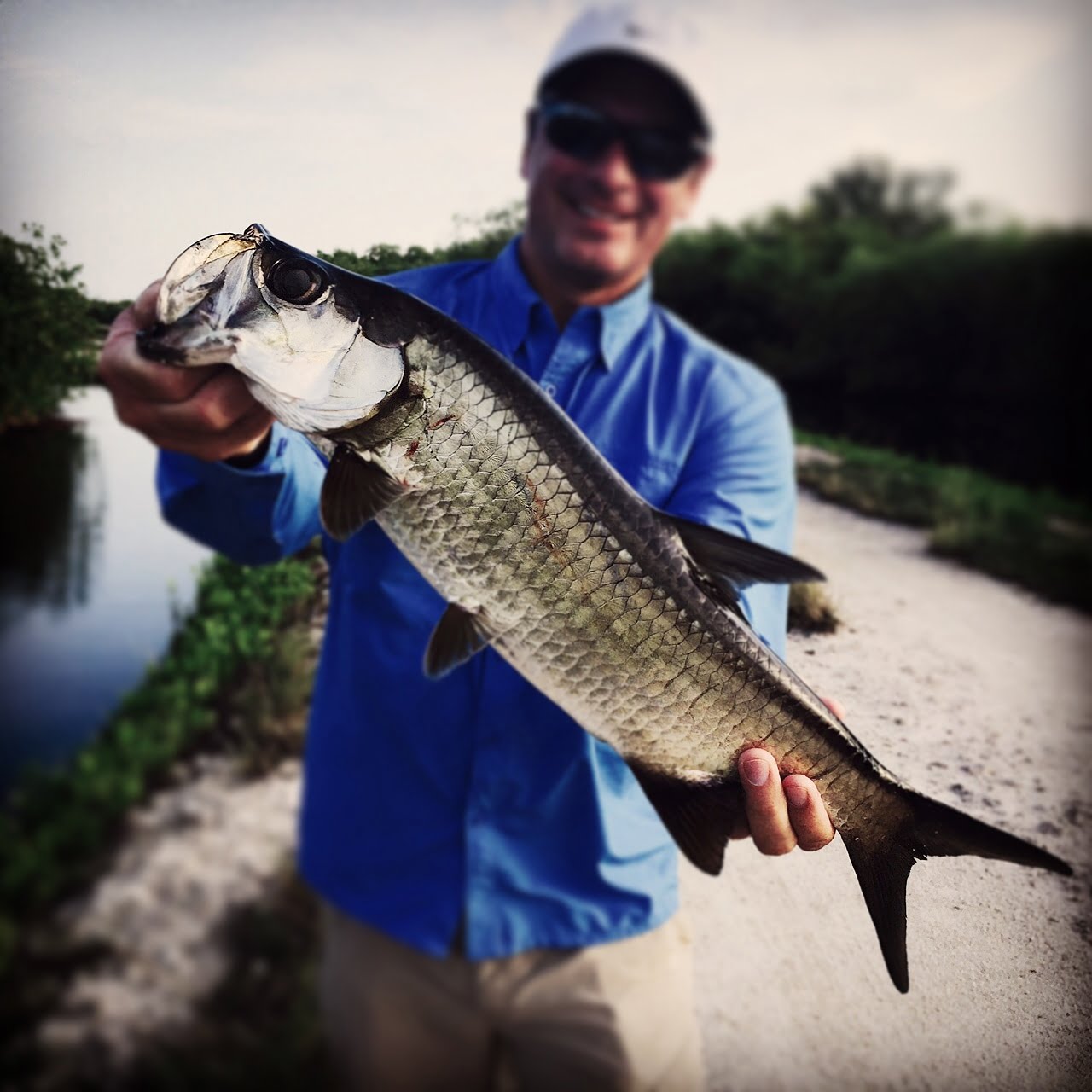 TARPON…
are abundant in Cayman, especially on the reefs. However, there is a concentration of juvenile tarpon—fish in the 2-15 pound class—in the backwaters and canals of Grand Cayman: easy access for the angler on foot. These aren’t 100-pound monsters, but are great fun on light tackle. They smash tackle and jump like crazy. Again, small (yellow) bucktails do well, but don’t rule out topwater! First thing in the morning or at dusk these little guys just smash floating plugs. Again, fly fishing works great for Cayman tarpon; any bass-bug or popper chugged along the surface will draw explosive strikes! But, make sure you’ve got at least a foot of 25-lb flourocarbon as a bite tippet. They might be small, but these tarpon have very hard, abrasive mouths that will eat through standard tippet in a second. The larger the fish, the heavier the bite tippet. I recommend the Fast Albright Knot for adding bite tippet to your leader. 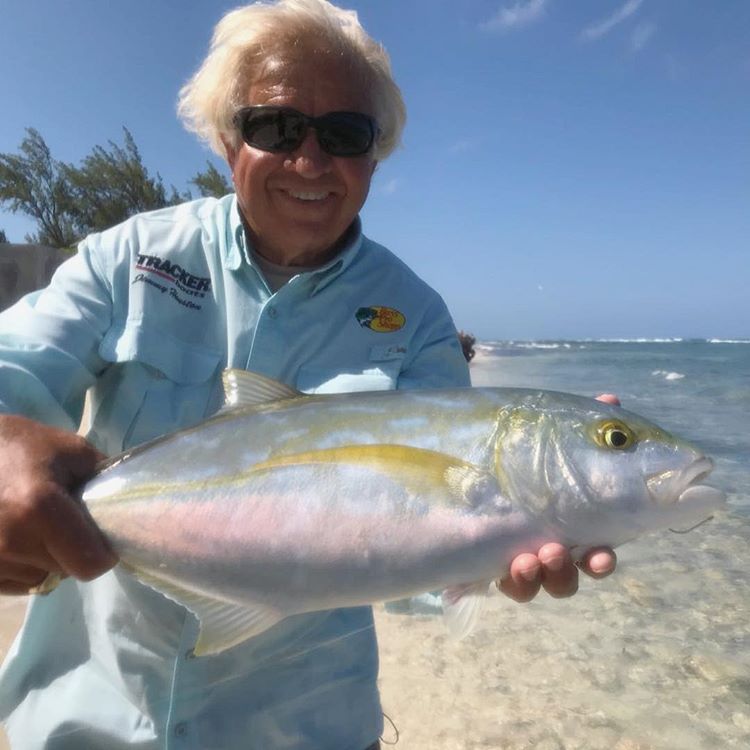 JACKS, BARRACUDAS, SNAPPER, ETC.
There are many other fish that can bend a rod in Cayman. Jacks are plentiful and can be caught blind-casting off the edges of the flats. They like flashy lures/flies retrieved quickly. However, there are times when larger Yellow Jacks school up and hit the flats, tailing and finning like bonefish. Almost any fly or lure dropped in front of them will get bit, and they are a blast on light tackle. However, without a wire bite-tippet you’ll lose a lot of lures to the numerous young cudas that hunt in the same areas. For targeting barracuda specifically, you can’t beat a Cuda-Tube in green or orange. Large barracuda are tougher on fly, but long tube-flies with a stinger hook on a 10-weight will get the job done. Poppers work great too, but they’re a lot harder to cast in the wind. Snapper are more finicky, especially the prized mutton snapper. Happily, these are often caught when dredging the bonefish muds of the North Sound, but targeting them specifically is tougher. They’re a very shy species and are best taken during the winter months when they come shallow to spawn. A fly slow-stripped along the edges of the flat can get the bite, and you can occasionally find them tailing on bonefish flats, especially near channels in the reef. But you never know what you’ll catch casting a fly in Cayman!

PERMIT.
Yes, there are permit here. Unfortunately, they are rare on the flats. This is because locals kill and eat them. However, there is a move among sportfishing anglers and captains on Grand Cayman to get the Government to provide complete protection for the Grand Slam—Bonefish, Tarpon & Permit. This would give them catch-and-release-only status, at least in certain, critical areas. It’s not perfect but would go far toward returning the population of permit to historical levels in Caymanian waters. And, with more permit in the water, more will visit the flats where they can be targeted by anglers. In the meantime, permit are more an occasional bonus than a fish you can count on. When we do find them they’re apt to be large, and seem to be similar to Florida Keys permit in behaviour. Toss a live crab at them and game on! Flies need to be heavy 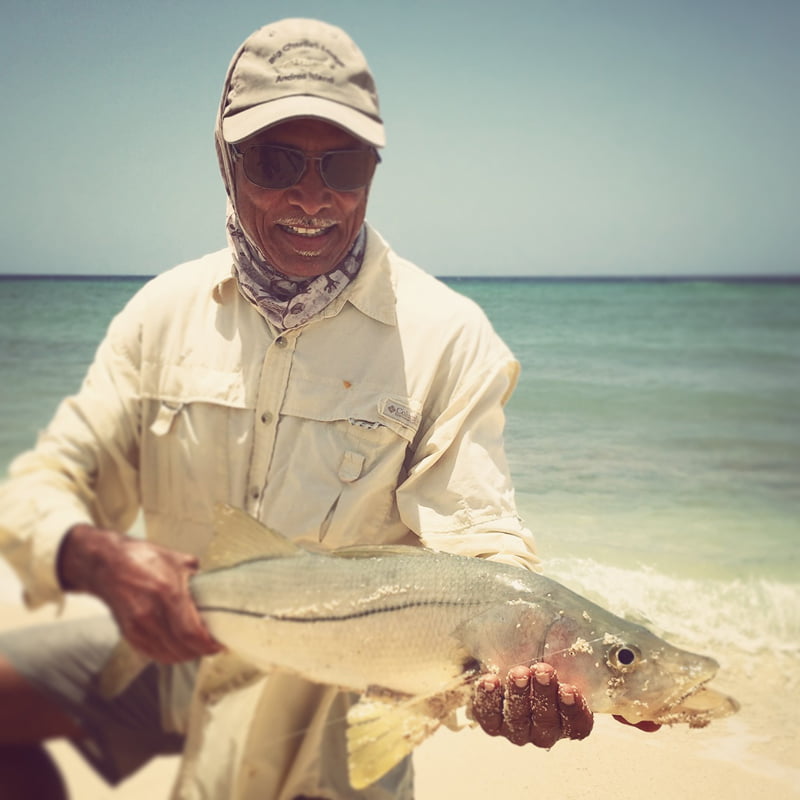 Grand Cayman Snook on the Fly

SNOOK…
aren’t nearly as predictable as tarpon or bonefish, although they run the coast in the summer months, just like they do in Florida. They aren’t popular in Cayman, simply because they aren’t common. It seems most of their lives are spent in the backwater mangrove areas of the North Sound and in summer they follow the baitfish along the coast. This can make for some great fishing for decent snook—fish in the 24-26 inch range. These fish like it “slow and low”; you’ve got to get down where they live and entice them to bite. Unlike tarpon, snook aren’t as apt to smash a topwater lure or fly, and they don’t seem to want to chase their food too far. But, if you can get your offering in the “zone”, hang on!

TRIGGER FISH…
are another deep-water fish that occasionally visit the flats, and they’re making a comeback in Cayman! Of course, these are a prized food-fish, so who knows how long this revival will last, but these fish are unmistakable on the flats by their dark appearance and angular shape. They’re spooky in shallow water, so stealth is needed. On spinning gear use a small crab or piece of shrimp. For flies, something small and “crabby”. Yarn crabs in #6 work great, and if you do hook up, keep your rod-tip high, as they’ll immediately try to cut you off on coral.

POMPANO…
are occasionally found along sandy beaches, especially if there is surf. They love bits of shrimp or crab and small bucktails jigged along the bottom. For flies try small, heavy Crazy Charlies, especially with any pink in them! Pompano are somewhat hit or miss, but always a fun catch.

For more info on fishing in Grand Cayman, don’t hesitate to contact us here: webmail@fish-bones.com.

A Taste of Grand Cayman

Inshore At A Glance 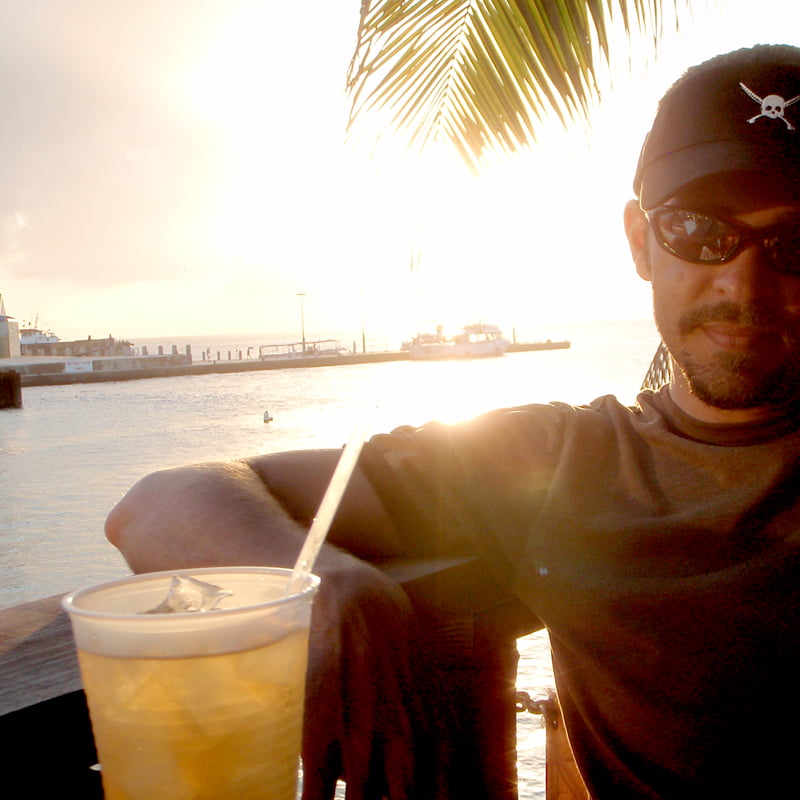 Davin Ebanks has fished the waters of Cayman since literally before he can remember, from blue-water, to the reef, to the flats.

Make Your Vacation a Fishing Adventure.