A strip-strike (a.k.a. strip-set) is a long pull with the line-hand to set the hook while fly fishing. While it’s mostly used in saltwater, but is just as effective for top-water bass fishing or streamer fishing for trout. However, in saltwater it is de rigueur. Trout-set on a bonefish and the only reward you’ll get is a resigned sigh from the guide.[1] Can’t take a picture of that.

Why does a strip-strike work on bonefish, but trout-set doesn’t? The answer that most saltwater anglers have heard is: “Raising the rod—trout set—pulls the fly away from the fish. But, if you strip-strike and miss, the fly only moves a foot or so and will still be in the zone so you can get another chance at that fish.”

Ok, fine, but that doesn’t explain why the trout set fails to actually set the hook at all. I’m not sure I’ve ever heard or read the real reason it’s nearly impossible to hook bones with a trout-set. The answer is actually simple, but does require an overview of how bonefish feed. Most freshwater species—trout, bass, etc.—eat a fly and turn. Trout turn back to their lie after taking a fly from the surface or snatching a nymph. Bass often take their food in a turning maneuver, heading back to their ambush spot. In either case the fish is headed away from the angler when he strikes, and the fish has its mouth closed around the fly. Raising the rod means you come tight and usually hook the fish in the corner of the mouth. Perfect.

This is exactly opposite from bonefish. Bonefish mostly feed on prey that only runs a short distance and then hides on the bottom. Of course, I have seen bonefish feeding on minnows and at those times they will strike a fly hard. But day in, day out, bonefish pick their food up off the bottom.

Most other fish eat a fly and turn… this is opposite from bonefish.

This is important. Most of the time when a bonefish grabs a mouthful of crab or shrimp, it gets a mouthful of bottom with it. I used to think that most puffs (patches of milky water made by feeding bonefish) were cause by bonefish blowing holes in the bottom. That’s what I’d read.

Careful observation, however, showed otherwise. Many bonefish puffs are actually debris expelled from the gills. In other words, a bone grabs a mouthful of crab-and-mud, crushes the crab with its crushers (the teeth in the back of the throat), and shoots the remainder out his gills. To do this comfortably a bone needs to have water running over his gills the whole time, to keep them clean. In fact, his mouth remains open during the feeding process. Raising the rod at this point simply moves the fly too fast for the hook to catch. In effect, you are pulling the fly back out of it’s open mouth. Remember his teeth are in his throat. There is no reason for a bone to close his mouth around his food, or your fly.

So, why does the strip strike work? Why doesn’t it pull the fly out? Well, it can when performed incorrectly. Trying to set the hook with a jerk often has the same result as a trout set. That’s why guides harp on a long, smooth strip to get it done. A proper strip-strike moves the hook just fast enough for the tip to catch somewhere in the bone’s mouth, preventing the fish from spitting it. Then, all you need is a small pull to bury the hook point and fully hook the fish. 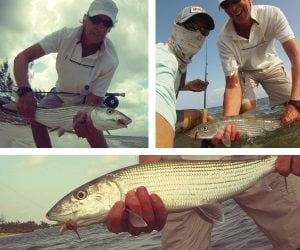 (Fig. 2) All Larry’s bonefish hooked in the corner of the mouth.

To understand this better, try this little experiment. Tie a hook onto a leader and drop it into a cardboard box. Now, jerk the fly really hard and it will fly back out of the box. No hook-up. Try it again but instead pull slowly and steadily on the leader. The fly should hook the corner of the box, at least a little. That’s the basic idea. It’s an over-simplification and the more experienced bonefisher learns to use a combination of the strip-strike and proper angle of the rod to really hook the fish right off. Still, merely coming tight with a smooth strip and then lifting the rod (to cushion the bonefish’s first run) will get the job done nine times in ten.

If there is any slack in your line you won’t feel the bite.

Setting up the Strip Set

Since the fish are swimming at you, maintaining contact with the fly is critical. Bonefish keep swimming in the same direction after they suck a fly in, which causes anglers to miss a lot of bites. After all, when a bonefish realizes your fly isn’t food they simply blow it back out again. If there is any slack in your line you won’t feel the bite. That’s why watching the fish at all times is so important. You need that visual sign the fish has eaten. That’s also why we check the fly so often when bonefishing. If they eyes are twisted around that means the fish ate it and spit it before you could strip-strike. Often bonefish won’t eat flies with the eyes twisted since they ride funny. And, if you’re new to bonefishing and still unsure of the fish’s body language, listen to the guide.

Also, if you’re tracking fish over dark, grassy bottom[2], remember the “puffs” are almost always behind the fish. A fish tips up (sometimes tailing), takes a mouthful of bottom, eats whatever food he finds in it, and after he tips back to horizontal , ejects the puff from his gills. That’s why casting to the puffs will often line fish. Instead, cast a little ways ahead of the puffs, let the fly sink, and start a slow retrieve. Keep in touch with your fly and if you feel any change in pressure—a bonefish bite often feels like you just barely snagged a piece of grass—if you feel anything, make a long, smooth pull and strip set!

Try these simple tips next time you have a bonefish tracking your fly and I guarantee your odds of hooking it will go up.

____________________
1 That is, if you’re fishing with that kind of guide. A good guide tries hard never to make the angler feel bad. I mean, if you miss a fish you already feel bad enough, having the guide audibly judging you doesn’t help. Right? [back]
2 Which is the main type of flat we have in the Cayman Islands. This is good for growing big, happy tailing bonefish, but these flats aren’t easy to see fish over. That’s why listening to the guide is so critical, especially when you can’t see the fish. [back] 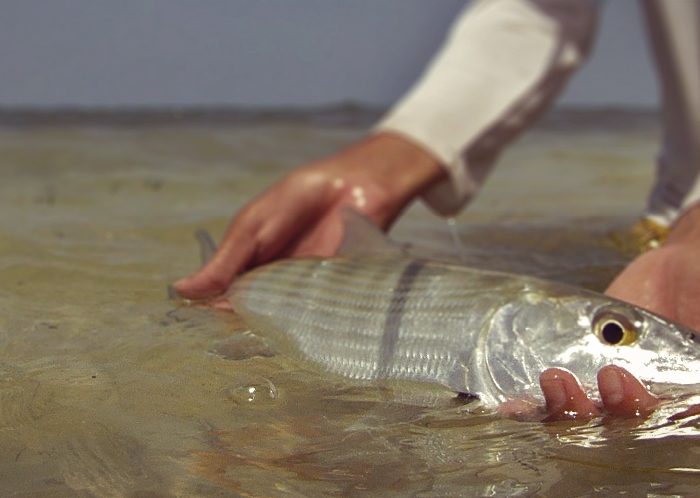